Quincy, IL is celebrating 30 years of Gus Macker 3on3 on May 29-30. This will be the first official Macker tournament since the COVID-19 pandemic hit. The deadline is fast approaching, only one week away on May 10.

The Quincy Exchange Club has hosted the Macker for all 30 years, raising over $750,000 for local charities in the process.

The tournament is limited to the first 300 teams that register! Go to macker.com to signup your team now!

On The Bench with Rodney Hart

On The Bench with Derrick

"On The Bench" with Kyle

Gus and Mike On The Bench

The Gus Macker 3 on 3 Basketball Tournament is designed so that anyone can play: male or female, young and old, short and tall, the most experienced or no experience at all. This maintains the purity and integrity of the driveway game.

Since 1987, the Macker tour has expanded, holding a total of 972 tournaments with over 2.2 million players – male and female from 7 years old to 50+ - and more than 23 million spectators.

BELDING, MI – When the next class of the Gus Macker Basketball Hall of Fame is inducted it will include a pair of dynamic duos – Central Michigan University professors Dr. Tim “T.O.” Otteman and Dr. Lori Irwin of Mt. Pleasant, MI, and Jamey Mullen and Tom Revoir of the YMCA in Norwich, N.Y.

The Gus Macker Basketball Hall of Fame has inducted a new class every five years during anniversary celebrations since the 25th anniversary of the touring three-on-three basketball tournaments company. Gus Macker, based in Belding, MI, celebrates 45 years in the summer of 2018, during which the next class will be inducted in special ceremonies.

Otteman and Irwin lead the effort at Central Michigan where they have created a class (RPL 333 Production of Festivals and Events) that with 35 students puts on a Macker tournament each year. It is the only Macker that is presented by college students as part of an academic program. Scott McNeal, a.k.a. Gus Macker, is a graduate of CMU.

Mullen and Revoir have led the YMCA of Norwich, N.Y., efforts in hosting a Gus Macker tournament annually for the last 22 years. Norwich, a city known for its festivals, has accepted the tournament as a major event in the community. The tournament benefits the many community charities served by the YMCA.

Otteman and two CMU students, as well as Mullen and Revoir made presentations at the recent Gus Macker 2017 Conference in Grand Rapids. The conference calls together Gus Macker tournament staffs from across the country for education and an exchange of ideas.

Over the years Gus Macker has presented over 1,000 tournaments for over 2.2 million players, male and female, from ages 7 to 50-plus. An estimated 23 million spectators have witnessed the community-minded basketball festivals and helped raised countless charitable dollars.

The first Macker was presented in a Lowell, Mich., driveway by brothers Scott and Mitch McNeal on spring break in 1974 with 16 friends making up six, three-player teams. It grew in fun and numbers into a neighborhood festival and eventually a phenomenon launched to national fame by a July 8, 1985 story in Sports Illustrated by Alexander Wolff. In 1987 Gus Macker Basketball expanded from a single tournament to a national tour.

Visit www.macker.com to learn more about Gus Macker or play in a tournament in one of the 40 tournaments scheduled across the country for 2017. 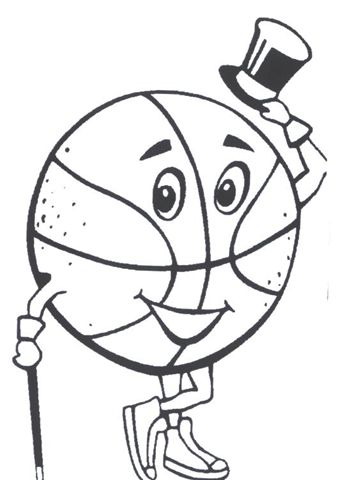 Bad Boyz, In Your Face

Putting Gus in the Headlines

Queen of The Macker

The Judge and His Court Jesters

“For The Love of the Game”

Bringing the Macker Man to Life

Ned and His Neighbor

Klint, Kon, Kole and Klay – Akrobatic Kings of the Kourt

The Defender of Human Rights

The Big Fella with the Big Heart

Godfather of Macker in Ohio

From the Macker Driveway to Indiana University

No. 1 in our Hearts, The Entertainer

Put the “Gus” in Macker

On The Bench with Gus and Crew - Episode #9

On The Bench With Marty - Episode #7

On The Bench with Zach Williams - Episode #6

On The Bench with Steven "Preacher" Lee - Episode #5

On the Bench with Gus - Episode #3

On the Bench with Gus - Episode #2

Gus Macker to Visit Kentucky! Go Blue….See You in Morehead!

Jack Galatio - The Prince of Macker

Hobbs, NM a Macker Tournament or a Family Festival- Why not both? 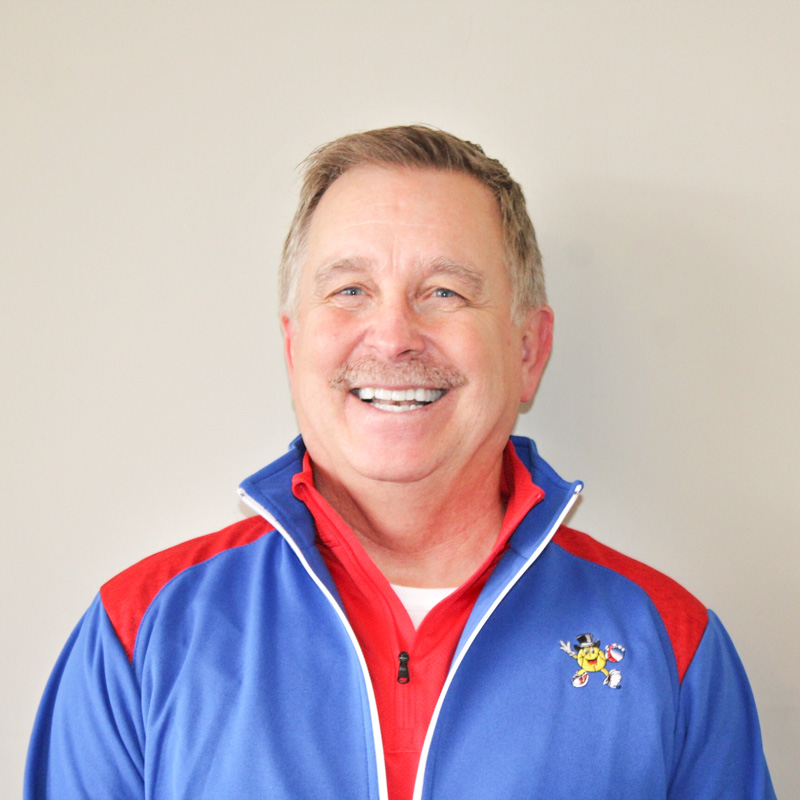 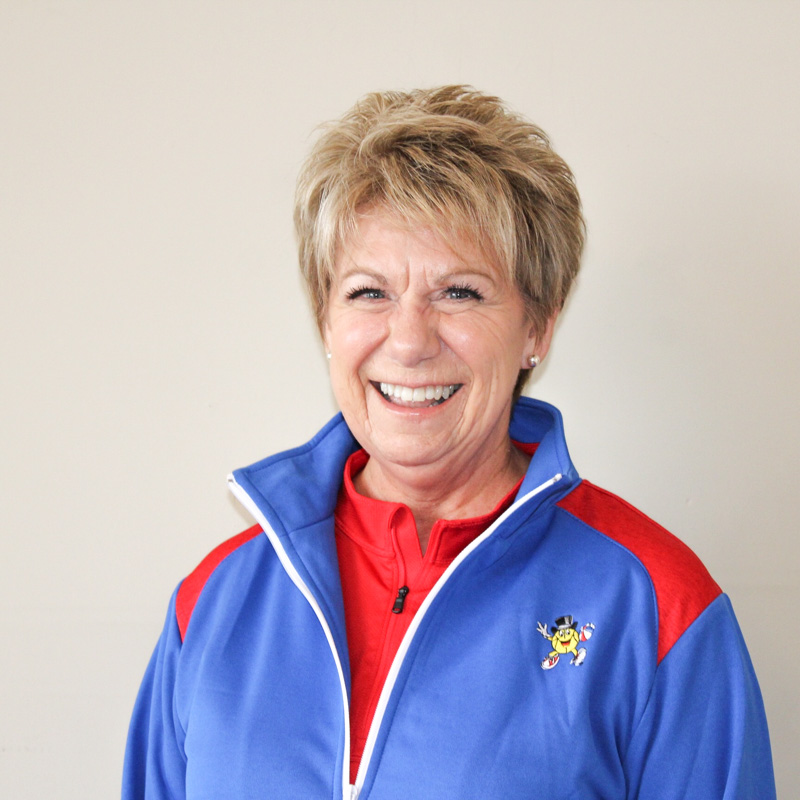 V.P. of Marketing and Community Affairs 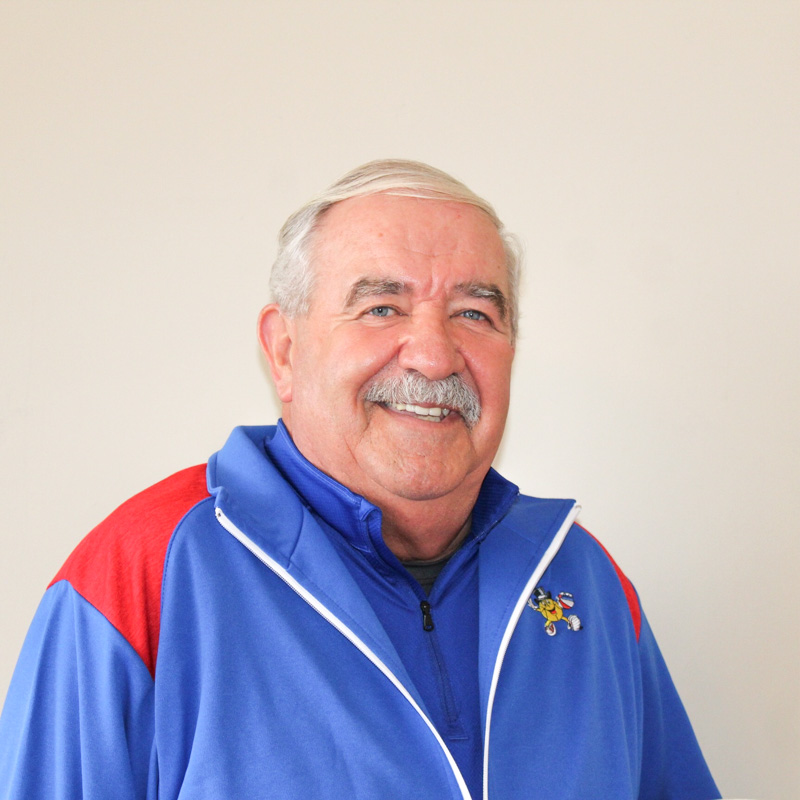 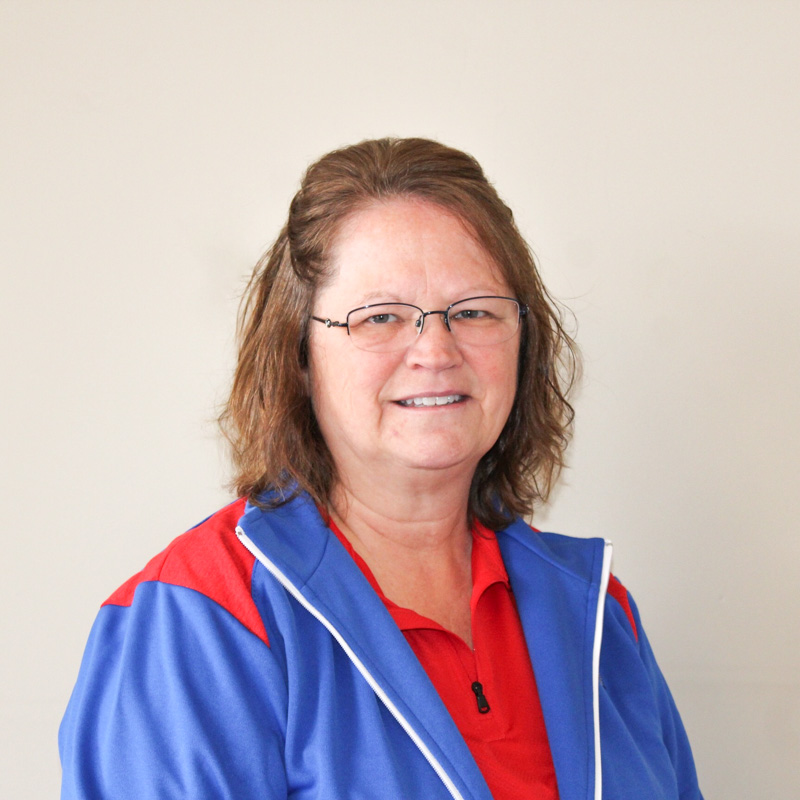 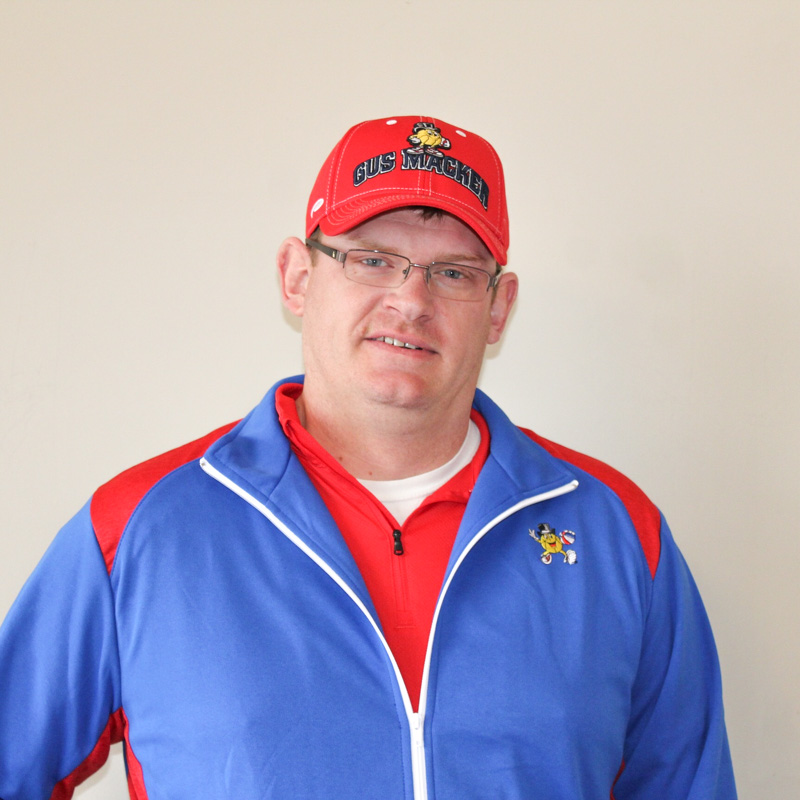 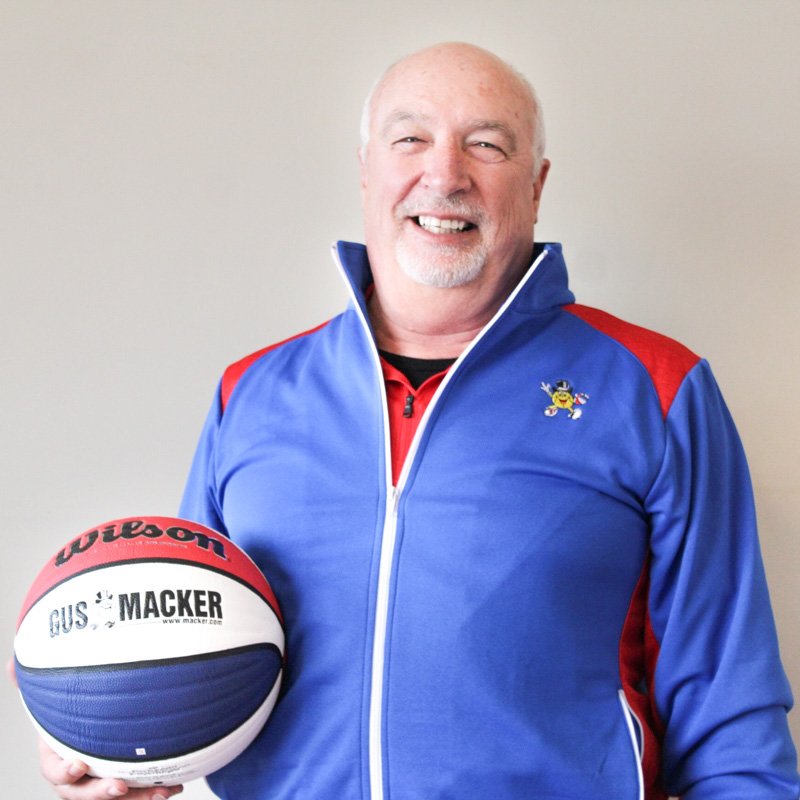 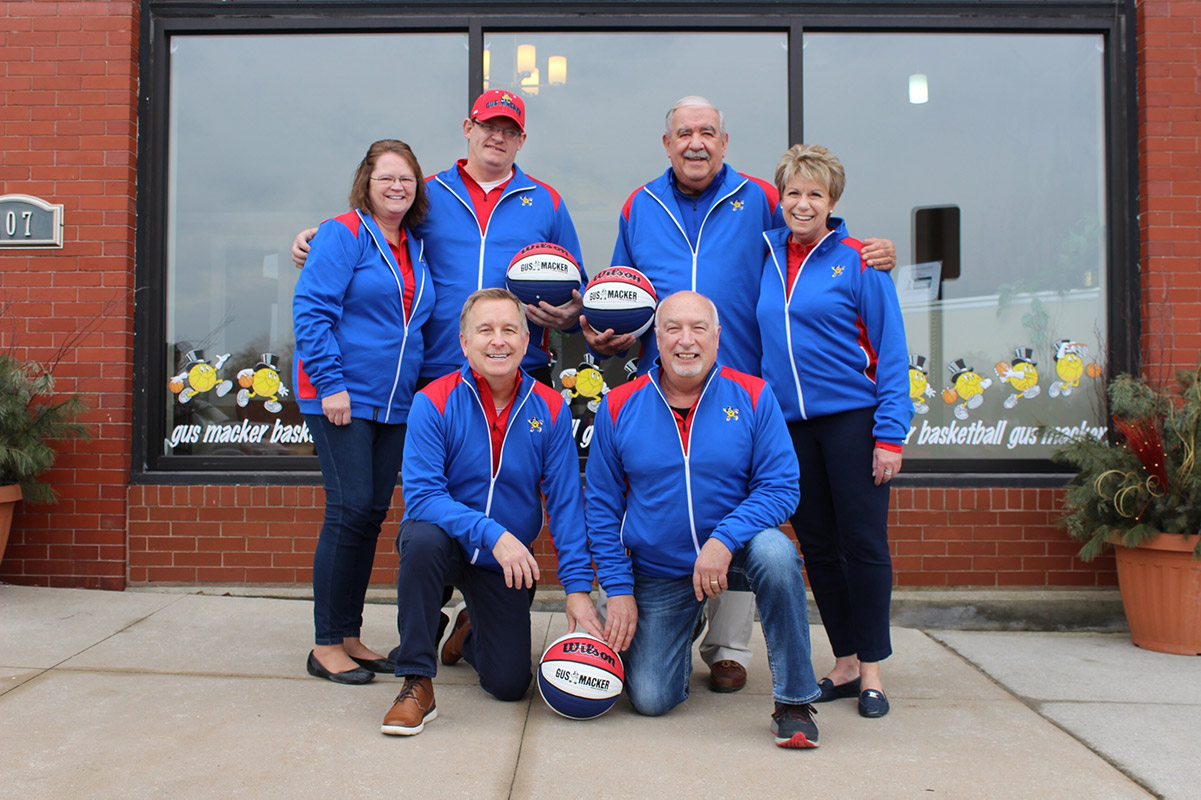 The Original Gus Macker 3-on-3 Basketball Tournament was started in 1974 by Scott McNeal (alias Gus Macker) on his parents’ driveway basketball court in Lowell, Michigan.

The Macker Tournament is designed so that anyone can play: male or female, young and old, short and tall, the most experienced or no experience at all. This maintains the purity and integrity of the driveway game. Since 1987, the Macker tour has expanded, holding a total of 972 tournaments with over 2.2 million players – male and female from 7 years old to 50+ - and more than 23 million spectators.

Teams are computer-matched into male and female divisions within one of the following categories: Junior, Adult, or Top. The age, height and experience of all four (4) players are considered. Teams receive at least three (3) scheduled games each tournament. The Macker is a double elimination tournament with a consolation bracket: the “Toilet Bowl” for teams losing their first two games. A GusBuster maintains law and order on each court and calls all fouls and violations in the Junior Divisions.

The History of Gus Macker

The Original Gus Macker 3-on-3 Basketball Tournament was started in 1974 by Scott McNeal (alias Gus Macker) on his parents’ driveway basketball court in Lowell, Michigan. It started with 18 friends playing competitively for $18.

The tournament continued to grow and in 1987 moved from Lowell to Belding and took to the road because of a tremendous demand from communities outside of the home base.

The “Gus Macker All- World Tour” was greeted with enthusiasm and spectacular news coverage in every area. Over 10,400 players participated in five cities in that first year. Since 1987, the Macker Tournaments has expanded, holding both indoor and outdoor tournament in over 75 cities and with over 200,000 players and 1.7 million spectators enjoying 3-on-3 competition and family fun each year.